This was the state of my very 1980’s and very dark, guest bathroom. It wasn’t a pretty sight.

From the moment we bought the house (in 2006), I wanted to change this bathroom. But what are the two most expensive rooms in the house to remodel? The kitchen (here’s our current progress on that) and the bathrooms.

So, the builder’s beige bathroom had to wait. But last year, we finally had the funds and the motivation to tackle this project.

Take a look at the before shots of this beauty 😂….. 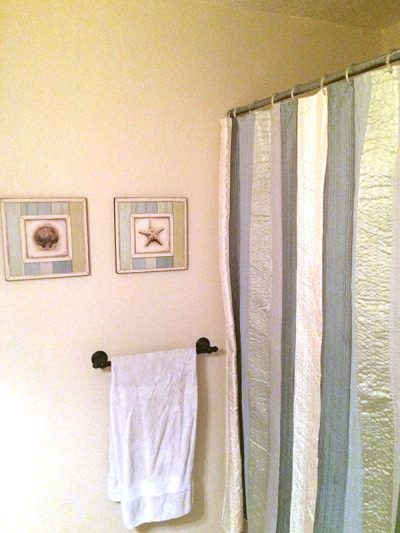 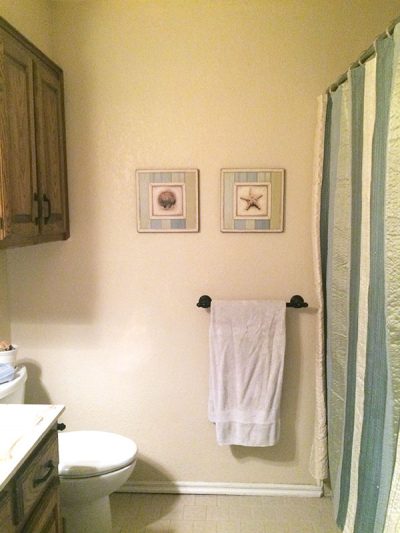 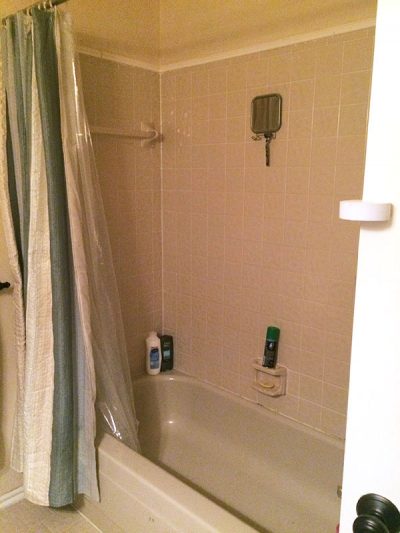 One of the main reasons it took me so long to show this remodel is that it was especially difficult for me to take proper photographs in a narrow bathroom with no natural light. You should have seen me crouched in the shower with a tripod and a stand light, while simultaneously trying not to photograph myself in the mirror! So, bear with me. These photos are mostly shot at angles and it was tricky to get the colors to show accurately.

*some of the links below are affiliate links

Shower half wall with a window:

The biggest change to this bathroom was the removal of the bathtub in exchange for a larger shower with a door. We increased the size of the bathtub’s original footprint an extra 4 inches in width. This gave us a shower interior that is 31 inches wide by 60 inches long.

As a cost saver, instead of buying a larger glass door, we went with a single glass door and added a half wall. 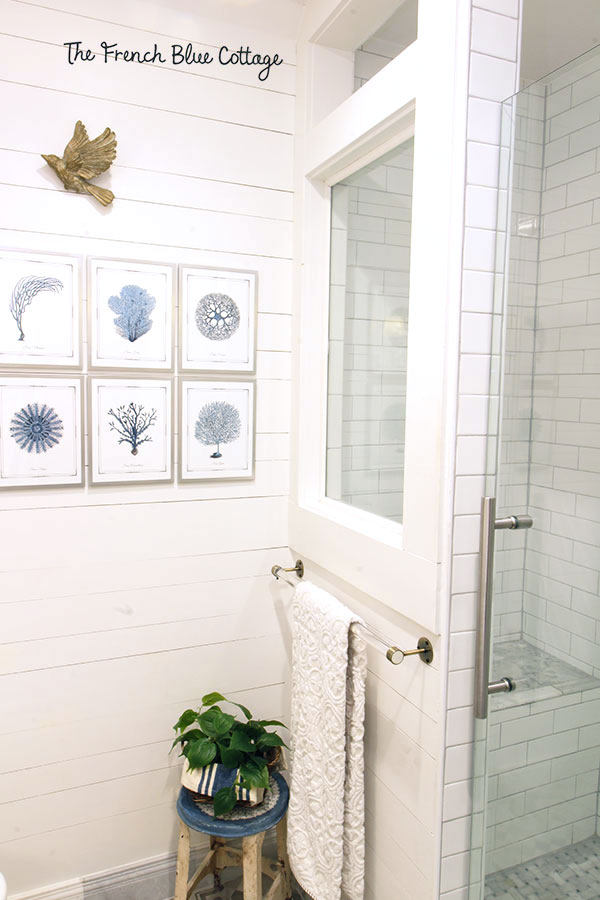 The shower half wall has an opening for venting at the top and I had a local glass shop cut a piece of tempered glass for the window.

This gave us the best of both worlds. It helped the budget and lets in a lot of light, so that the back of the shower doesn’t feel like a cave. The cost-savings came because we only had to buy the single door. The price of the tempered glass window was less than $100! 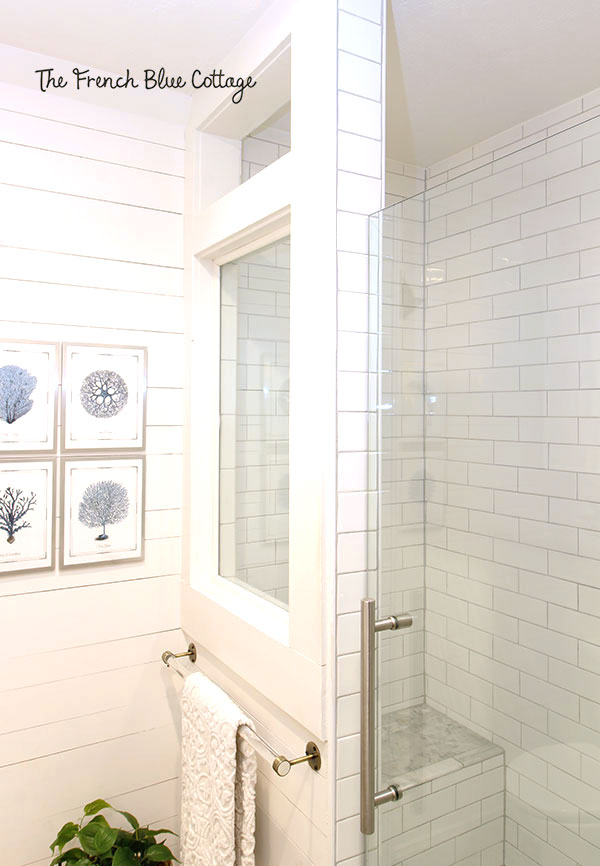 The length of the shower (the original bathtub length) gave us plenty of room for a built-in bench, too. 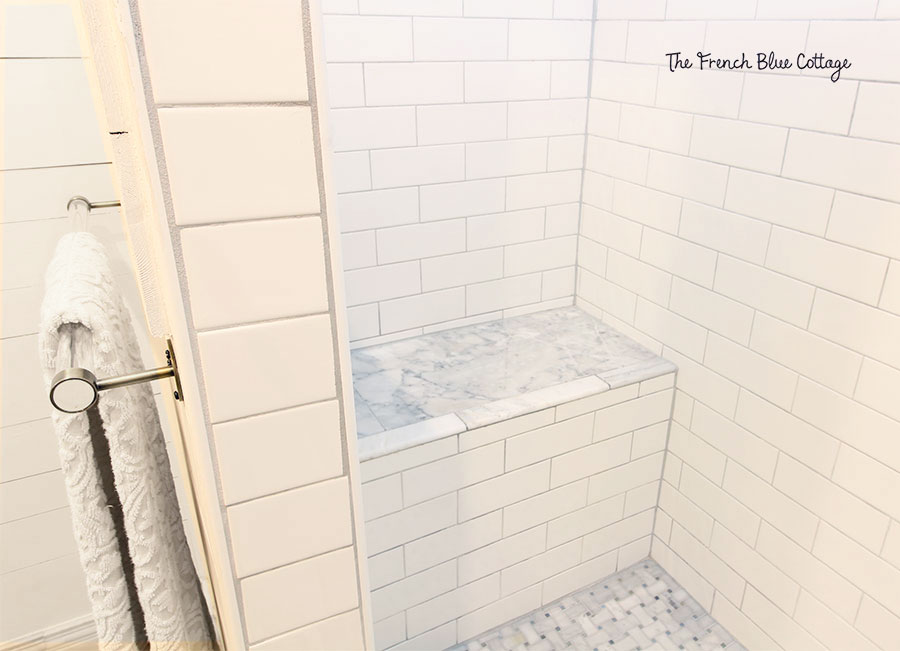 For the floor, we went with a marble in a basketweave pattern. The curb is topped with marble tile.

I chose a square drain instead of the typical round. 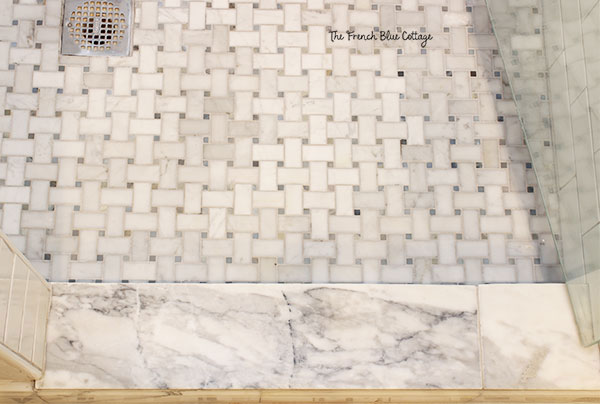 We put one built-in niche on the shower head wall. It’s cut from the same marble tiles that we used on the shower curb. You can just see this niche to the upper left of the faucet in the next photo…. 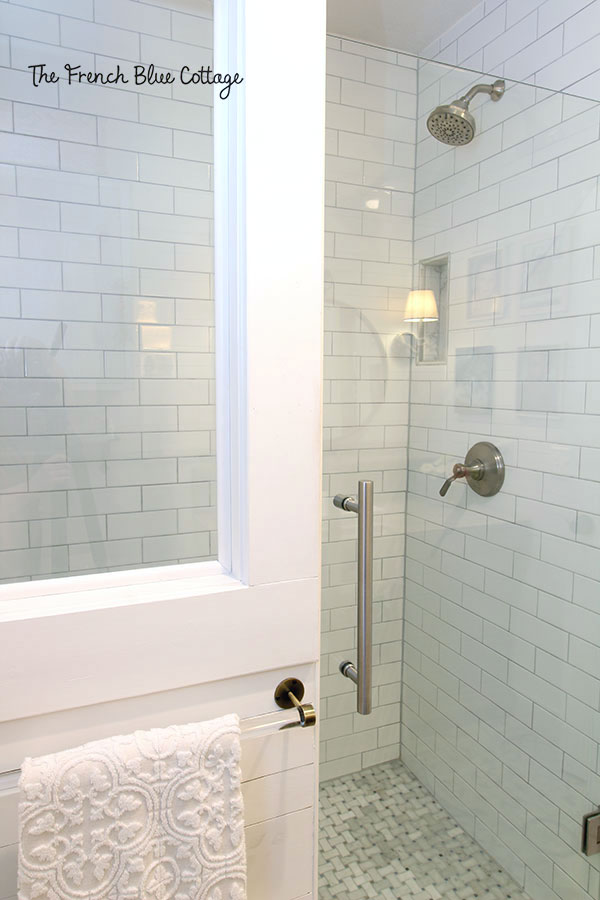 I added another niche on the inside of the shower half wall, making sure it fit my jumbo shampoo and conditioner bottles! This one has some of the same marble tile around its edges and the basketweave tile from the floor is repeated on the back.

I love that neither of the two niches are really visible from inside the bathroom. It keeps things looking tidier.

I also found a suction cup that works quite well for shower poufs or brushes and a plastic soap keeper that keeps the soap from getting slimy inside the niche. 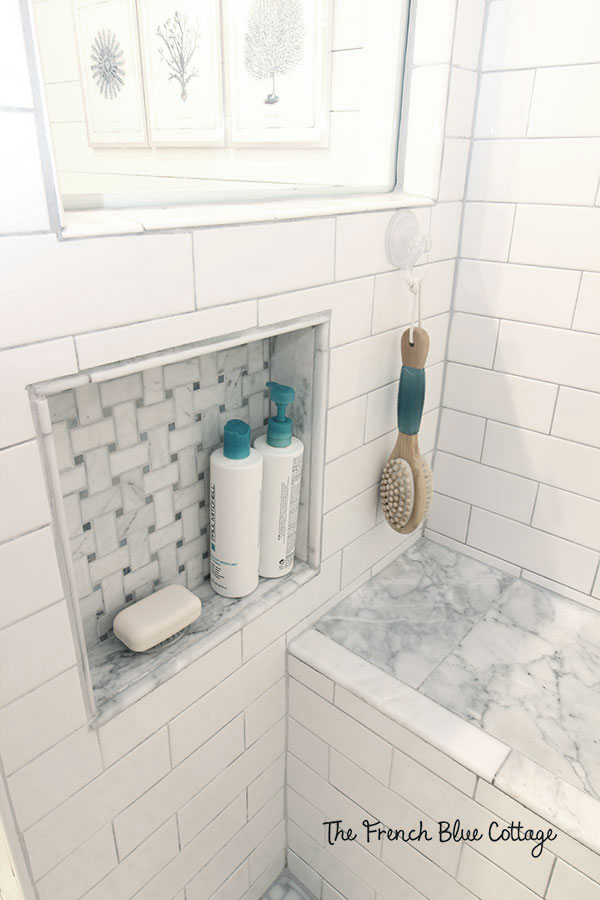 I remember reading a whole discussion on another blog I follow about the best way to hang your wet towels. Many people said that they use hooks to keep their towels from getting that mildewy smell. I just can’t understand how hanging a towel, with all the folds draping down, could dry as well as one that is spread out across a bar.🤷🏻‍♀️

Anyway, I like to hang mine on a towel bar.

The towel bars are made from acrylic rods that we cut to size and mounted with curtain brackets. I can’t take credit for this amazing idea, though. Here’s the tutorial I used to make them. 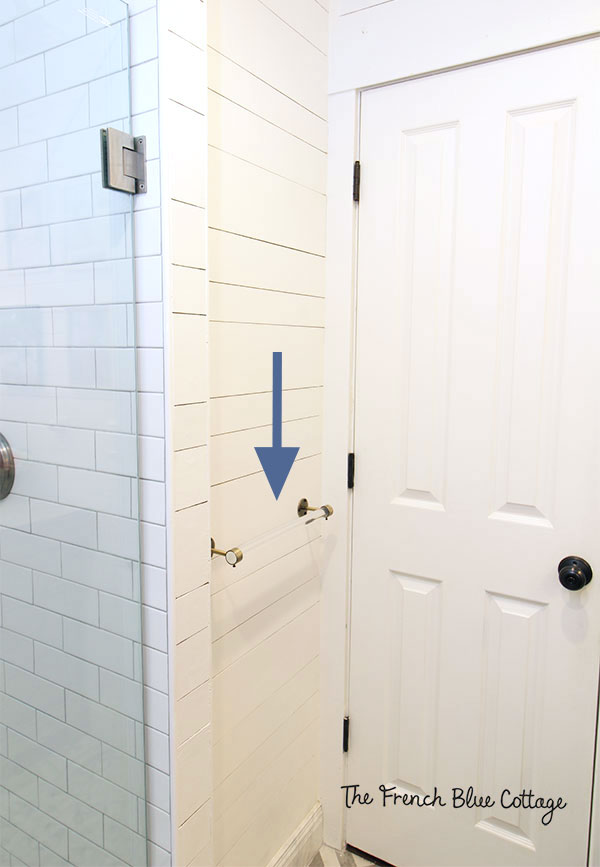 For the artwork, I used a grouping of six sea fan prints in blue and white. And the frames were unbelievably inexpensive because they are just document frames that I found at Walmart for only a few dollars each! 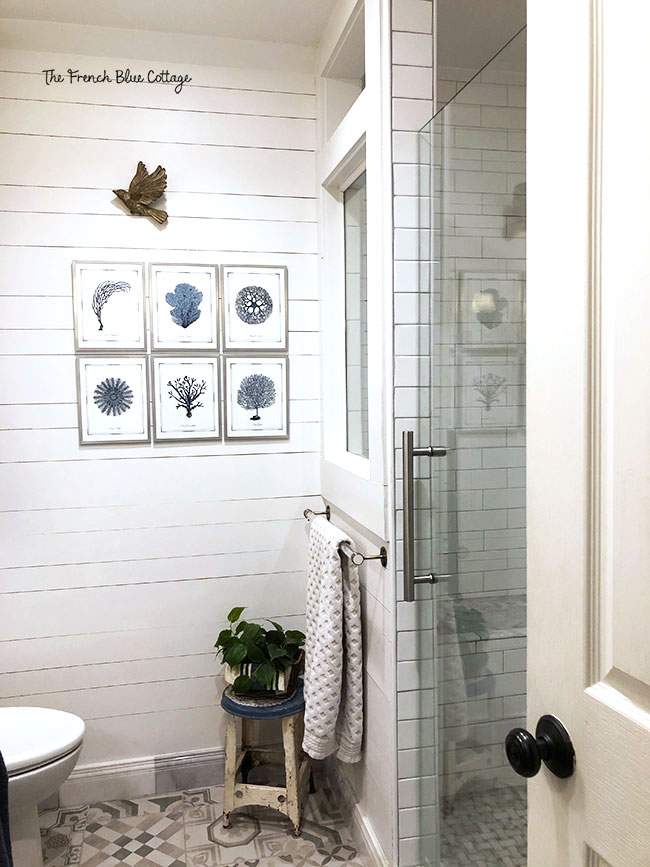 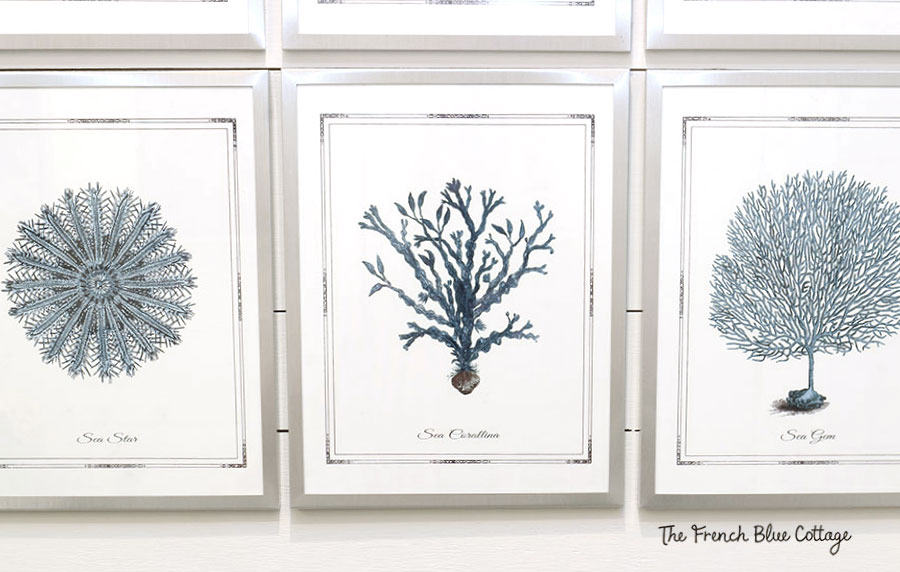 This post is getting pretty long, so I’ve decided to split it into two. I’ll show the rest of the bathroom makeover in my next post.

Until then, here’s a little sneak peek at the other side…. 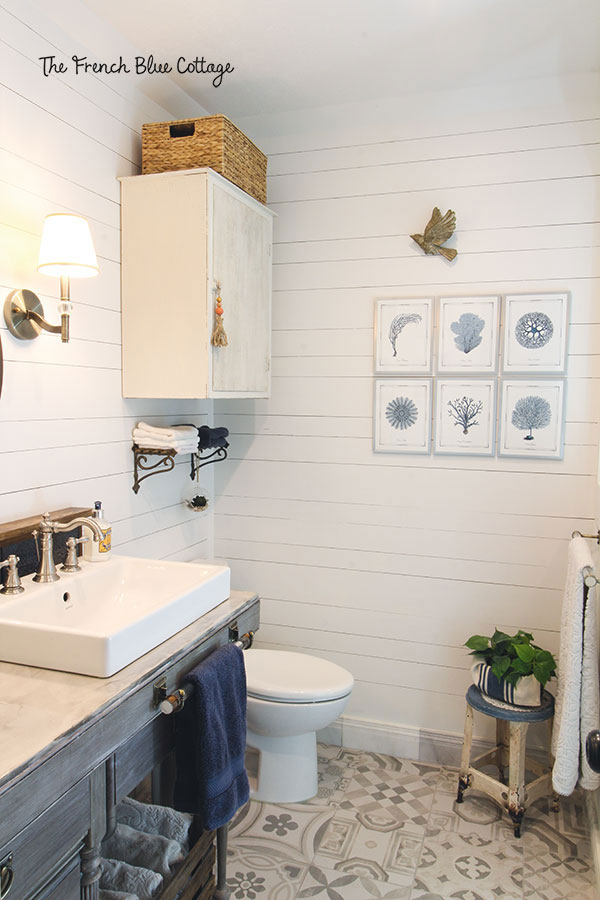 *Update 1: See the second part of the bathroom makeover here.

*Update 2: A reader asked a very good question about the size of our bathroom. Here are the dimensions: Our bathroom is 8 feet wide by 7 feet deep. We replaced the standard sized bathtub with the shower, but we extended the width an extra 5 1/2 inches into the room for a little more space. The inside dimensions of the shower are 31 inches wide by 60 inches deep. It’s not huge, but feels plenty roomy to me.

The half wall is 29 inches wide and 5 1/2 inches deep, including all the trims and tile. The tempered glass window is 20 1/2 inches wide by 35 inches high. The top window is just an open space to allow in extra light and to let steam escape.

*Update 3: I’ve had several requests to see another photo of the inside of the shower window. The window is trimmed with wood on the outside and is tiled and grouted on the inside. It is not directly underneath the shower, so it rarely gets wet. Typically, the only real moisture the window gets is some steam on the glass. 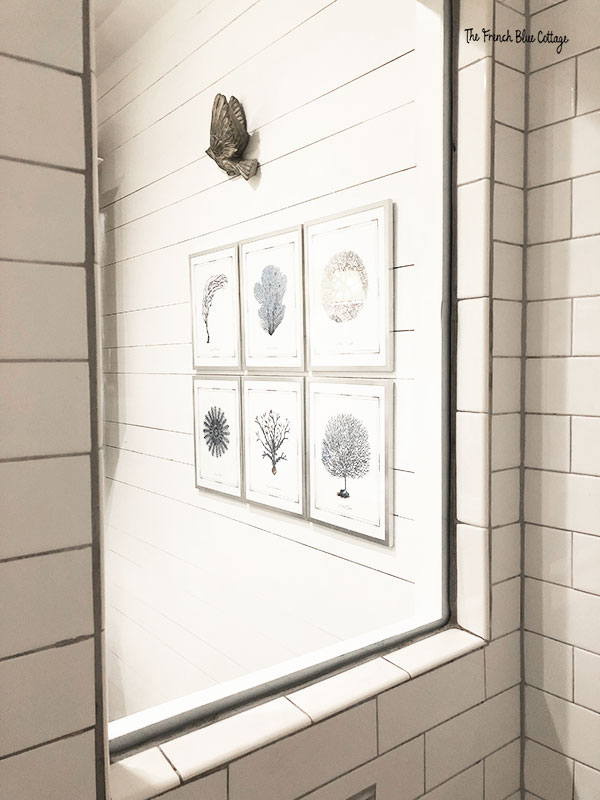 And one more before and after… 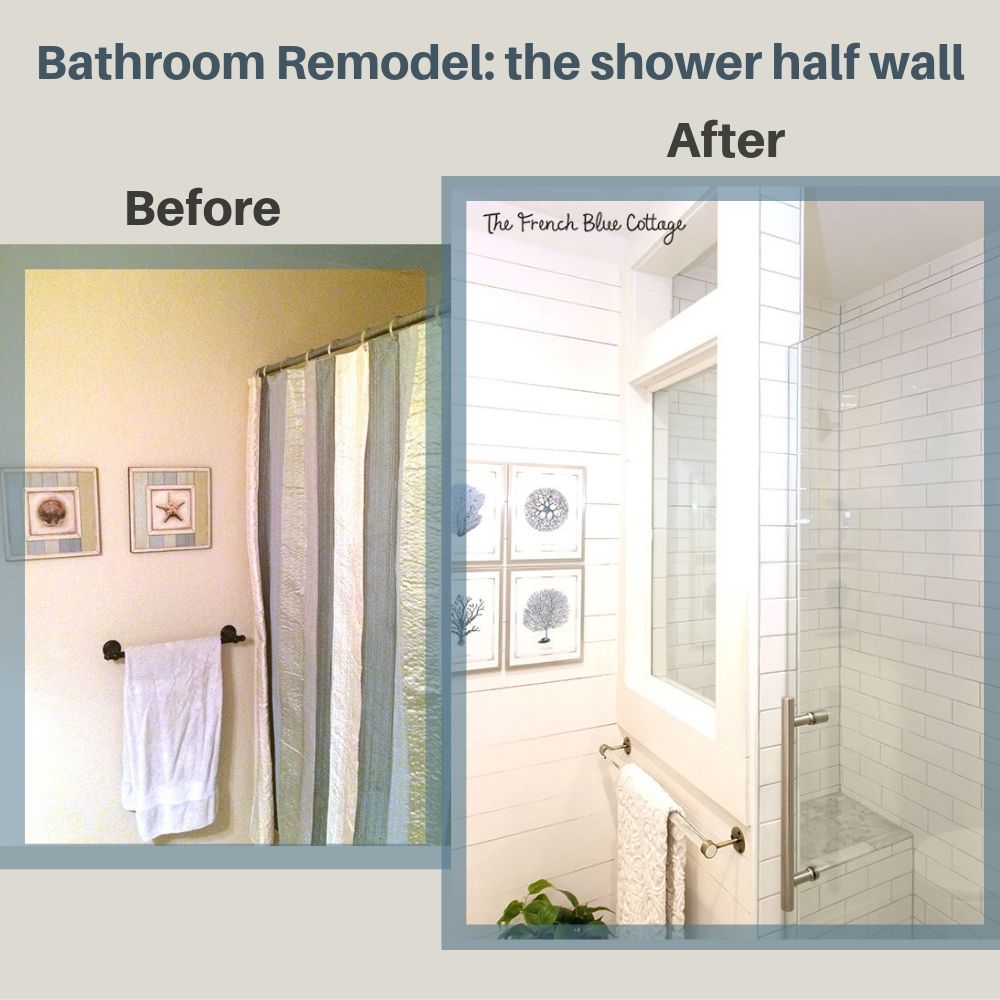 Grout (I believe the color is Pewter)

Curtain brackets for towel bars (these are the ones I bought, but I didn’t see brass this time)

Suction cups for brushes and razors

Document frames (I bought these at Walmart)

Square drain (similar to this, but ours has a removable strainer to prevent clogs)

I’ll be back to show the rest of the bathroom makeover in my next post.

Have a great weekend!

Update: See the second part of the bathroom makeover here. 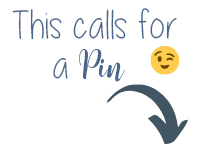 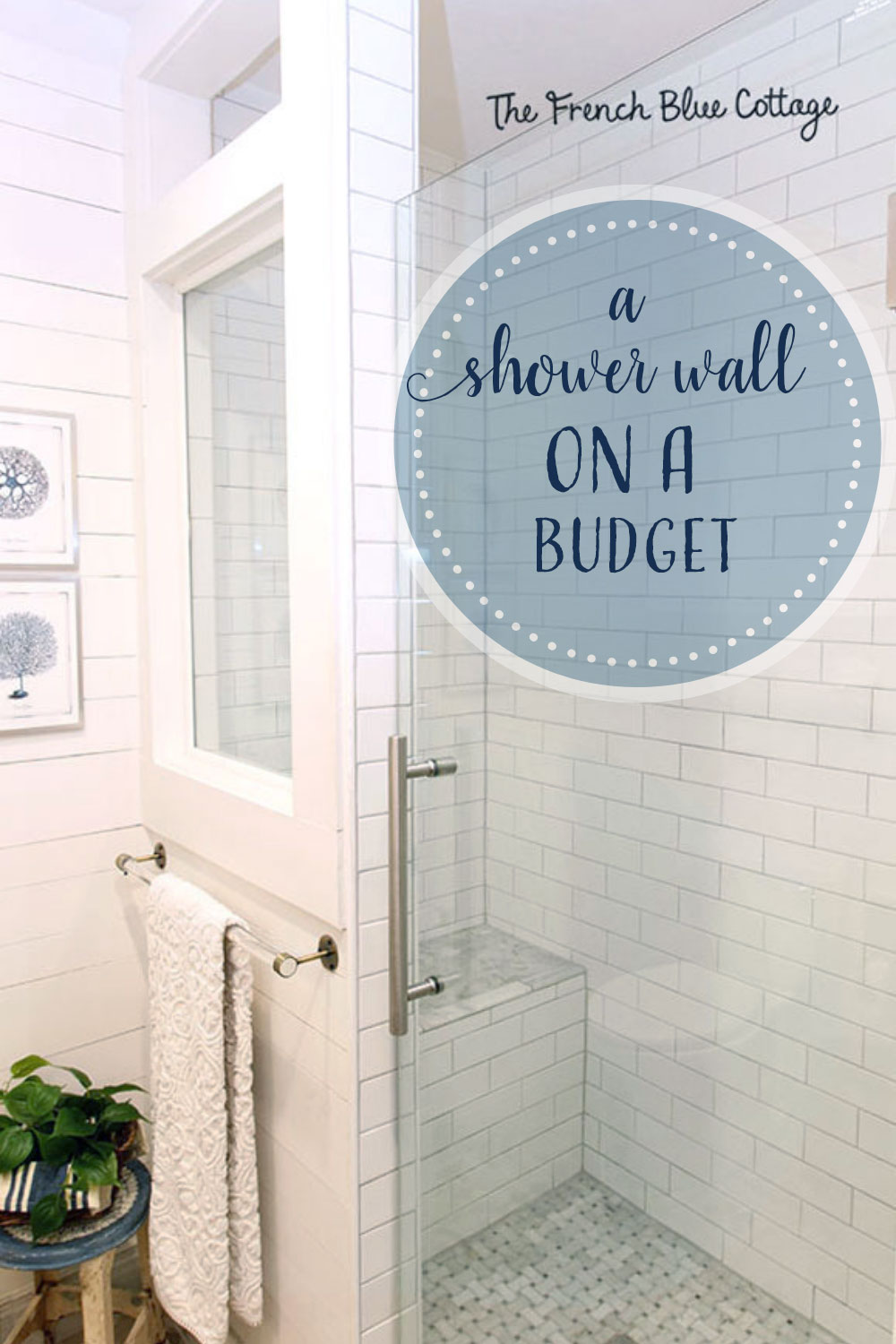